For the real deal, head on over to one of our 16 gaming tables. With the luck of the draw, a throw of the dice, or a spin of the wheel, you could win big! From the thrilling action of Blackjack, to the exhilaration of Roulette and Craps, these exciting table games are waiting to give you a piece of the action! If you love specialty games, check out Ultimate Texas Hold’em or Three Card Poker®.

Click the sections below to learn how to play:

Terminology
In Blackjack there are many colorful terms used throughout the course of the game. It is helpful to understand the more common terms in order to follow the progress of the game.

First Base:
the first player to receive cards from the dealer.

Hit:
to take an additional card.

Hole Card:
the face-down card in the dealer’s hand.

Push:
when the player’s hand totals the same as the dealer’s hand, you neither win or lose.

Scratch:
the motion made by the player indicating that he wants to take a hit.

Stand:
to decline a hit by sliding cards under bet.

Stiff:
a hand that will bust if hit by a face-card or 10.

Third Base:
the last player to receive cards from the dealer.

The Object of The Game
The object of the game is to draw cards that total as close as possible to 21 without exceeding it. The dealer begins by dealing two cards facedown to each player and two cards to himself, one card facedown and one card face-up. Any Jack, Queen, or King will have a value of 10. All Aces count as 1 or 11. All other cards will have their face value. If your hand totals more than 21, turn your cards face-up immediately as you have automatically lost. If your hand is closer to 21 than the dealer’s hand, you have won; if it is less, you have lost. If it is the same, you have “pushed.” If your first two cards total 21 (any Ace with a face card or 10), you have a Blackjack and should turn them face-up immediately. You will be paid at the rate of three-to-two or one-and-a-half-to-one unless the dealer has a Blackjack, in which case you will have a “push.”

Multiple Deck “21”
After dealing the cards to each player and himself, the dealer then starts with the first player on his left to see if that player wishes additional cards. Players DO NOT touch their cards, which are dealt face up next to their respective bets. If the player wants a hit, he makes a scratching motion towards himself with his hand. If the player feels that his hand is closer to 21 than the dealer’s and wants to stand, he makes a waving motion over his cards. The dealer follows this procedure with the next player to the right until all players are satisfied or have gone “broke.” The dealer then exposes his down card and stands or draws more cards. The dealer must draw to any count up to and including 16 and must stand on 17, except a Soft 17. A Soft 17 is any combination of cards totaling 6 with an Ace that can be counted as 11 (i.e. Ace, 6; Ace, 4, 2).

Doubling Down:
A player may elect to increase his bet by any amount up to his original wager. A player may only double down on his two original cards, regardless of their value. The dealer will then give him one additional card face-up.

Splitting Pairs:
If the player’s first two cards are a pair (any two cards of the same value), he may elect to split them by matching his original wager. Split Aces get one card each facedown. All other splits may be hit as often as necessary.

Insurance:
In the event the dealer’s exposed card is an Ace, he will offer “insurance” to all the players before checking his hole card. Insurance pays at the rate of two-to-one, and the player may wager any amount up to one-half of his original bet.

The Deal:
Players may pick up their cards, which are both dealt facedown. If he wants a “hit” he indicates so by scratching his cards on the tabletop by his bet. If he wants to “stand”, he simply slides his cards under his bet.

Doubling Down:
A player may only double down if his first two cards total 10 or 11. The dealer will then give him one additional card face down.

How to Play Craps

Phase I
A. PASS LINE:
An Even Money bet. On the first roll, the “Come-Out Roll,” you win on 7 or 11 and you lose on 2, 3, or 12 (Craps). Any other number becomes your point. If the shooter rolls the point before a 7, you win. If he rolls a 7 before the point, you lose, and the dice are passed on to the next player. Once the point is established, Pass Line Bets may not be removed or reduced. They may, however, be increased.

B. DON’T PASS/DON’T COME:
An Even Money bet. At any time you may bet against the next roll of the dice by placing a wager on the Don’t Pass/Don’t Come Line. On the first roll you win on 3 or 12 (2 is a Stand Off); on 7 or 11, you lose. If any other number rolls, the wager is placed behind the number. If the shooter rolls a 7 before the number, you win. If he rolls the number before a 7, you lose. Once the wager is behind the number, Don’t Pass/Don’t Come Bets may not be increased, but may be removed or reduced.

C. COME BETS:
An Even Money bet. At any time after the point is established, you may bet on the next roll of the dice by placing your wager on the Come Line. If 7 or 11 rolls, you win. If 2, 3, or 12 rolls, you lose. Any other number becomes your “Come point” and the wager is moved to the number. If the “Come point” rolls before a 7, you win. If a 7 rolls before the “Come point,” you lose. Once the wager is on a number, Come Bets may not be removed or reduced, but may be increased.

D. BIG 6 AND 8:
An Even Money bet. These bets win when the number selected rolls before a 7. They may be increased, decreased, or removed at any time.

Before proceeding further, we recommend that the novice player try his hand at the easy-to-understand bets that have been discussed to this point. This will allow the player to clarify any points of confusion by working with the dealer on a live game. Only when the player is completely familiar and comfortable with these bets, should he continue to Phase II of the gaming guide.

F. ODDS:
Players may “take” odds on Flat Bets on the Pass Line and on Come Bets after they have been established as point numbers. Odds are bets in addition to the Flat Bets in any amount up to twice the Flat Bet. In some cases, the Odds Bet may slightly exceed twice the Flat Bet to simplify payoffs. 4 and 10 pay two-to-one, 5 and 9 pay two-to-three, 6 and 8 pay five-to-six. All odds may be removed or reduced at any time. Ask your dealer for maximum Odds Bets allowed.

H. HARDWAY BETS:
A bet that the shooter will roll a specific number – 4, 6, 8, or 10 – with pairs (identical spots on each dice) before he rolls a 7 or that number with any other combination than a pair. Hardway 6 and 8 pay nine-to-one; Hardway 4 and 10 pay seven-to-one. All Hardway Bets are placed and paid by the stickman. They may be made or removed at any time.

Once again, before proceeding on to Phase III, we recommend that the player go to the Craps Game to clarify and familiarize himself with his newly acquired knowledge. Once he is comfortable with the bets discussed prior to this point, he should continue on to Phase III to complete his knowledge of the game.

BUY BETS:
Buy Bets are the same as Place Bets except you receive true and correct odds in exchange for paying a 5% commission on the wager. 4 and 10 pay two-to-one, 4 and 9 pay three-to-two, 6 and 8 pay six-to-five. You may make or remove a Buy Bet at any time. If you should remove a Buy Bet prior to winning or losing, the 5% commission is returned to you.

LAY BET:
If you wish to bet that the shooter will throw a 7 before he throws a 4, 5, 6, 8, 9, or 10, have the dealer “lay” your wager behind the number or numbers of your choice. Lay Bets pay true and correct odds. A commission of 5% of the amount to be won is charged at the time the wager is made. 4 and 10 pay one-to-two, 5 and 9 pay two-to-three, and 6 and 8 pay five-to-six. Lay Bets may be made or removed at any time. If a Lay Bet is removed prior to winning or losing, the commission is returned to you.

The Roulette wheel has 36 numbers from 1 to 36 plus 0 and 00. The numbers are alternately colored red and black. The 0 and 00 are colored green. The Roulette layout on the table is numbered and colored the same as the wheel. The winning wager is decided by random selection of one number out of the possible 38. The selection is produced by spinning a ball in a clockwise direction to the wheel rotating in a counter-clockwise direction. After the ball comes to rest in the numbered pocket on the wheel, the dealer marks the winning number on the layout. As soon as the losing bets are removed, all winning bets are paid.

You play with your own distinctly colored chips THAT ARE GOOD ONLY AT THE TABLE WHERE THEY WERE ISSUED. Chips must be purchased in stacks of 20. The amount of money paid for the stack determines the value of each individual chip (i.e., $10=$.50 chips, $20=$1.00 chips). These chips must be cashed-in before you leave the game. You may also play with the CASINO CHIPS or cash.

Play begins when you place your bets by putting your chips on the numbered layout. The exact placement of the chips determines the bet being made. Each player is responsible for the correct positioning of his wager on the layout. Bets may be placed until the ball is ready to leave the track and the dealer signals no more bets.

Playing The Game
To play against the dealer, the Player places a wager on the ANTE spot and is dealt three cards. After looking at their hand the player may fold, or if they think their hand is high enough to beat the dealer’s, the player can place an additional equal wager on the PLAY spot. If the player’s hand beats the dealer’s qualifying hand of a Queen or better, they win both wagers. If the dealer doesn’t qualify, the player wins the ANTE wager and the PLAY wager is a push (tie).

To play the hand value only and not against the dealer, the player places a wager on the PAIR PLUS spot. If their hand contains a pair or better, the player wins.

Ranking of Hands
From highest to lowest: Straight Flush, Three-of-a-Kind, Straight, Flush and a Pair. If no hand contains a pair or better, the hand that contains the highest-ranking card(s) wins. Ace is high except 3-2-Ace sequence. 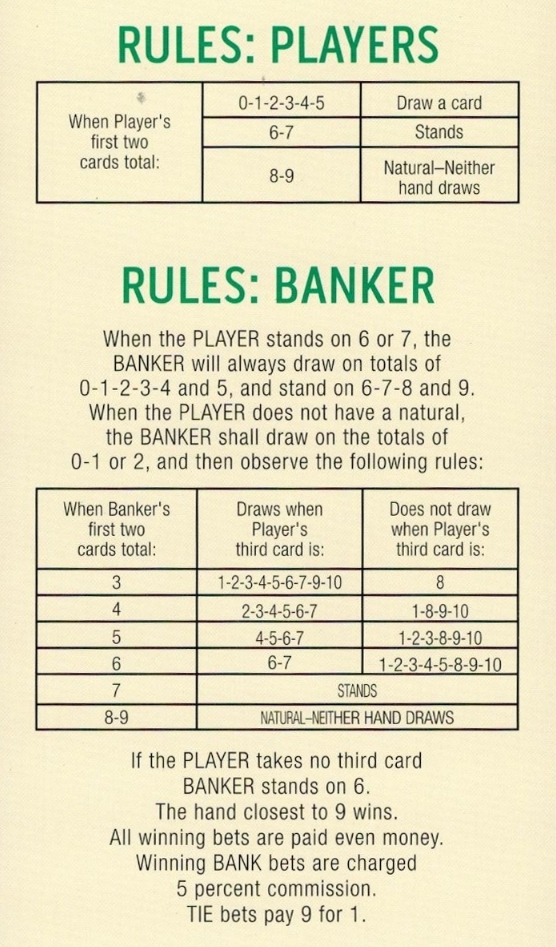 We use cookies to ensure that we give you the best experience on our website. By clicking "I accept" and continuing to use our site, you consent to use our cookies.I accept